People love the simplicity and functionality of Amish furniture. Most believe incorrectly however that the Amish only use hand tools for building their Amish furniture. This video by Dutch Crafters reveals …

A day in the life of home builders is unique. It is far different from the kind of days that most of the rest of us have. It is the case …

Is Minecraft Realms Worth It? 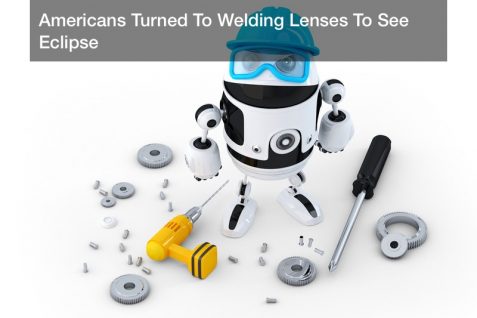 UPDATED 10/22/20 Welding tools are finding more uses than connecting metal parts to each other this month, as more and more consumers purchase welding glasses to enjoy the total solar eclipse. …

Welding tools are finding more uses than connecting metal parts to each other this month, as more and more consumers purchase welding glasses to enjoy the total solar eclipse.

Welding shades, specifically “Shade 14,” have become the item to have for people that wanted to observe the solar eclipse without cooking their retinas in the process. Just before the eclipse, many stores increased the price of their protective eyewear. According to WSVN, some listings of “eclipse glasses” rose as high as $129.95.

However, according to Susan Barnette, the Director at Buehler Planetarium and Observatory, there were a lot cheaper options.

“These are so strong that they will block out the same amount as these solar filters,” said Barnette, talking about welder’s glasses.

There are more than 500,000 welders employed in the U.S. today, according to the American Welding Society. And that means that these glasses are very, very common. Especially when one considers that many homeowners with workshops might weld as a hobby.

“All I did with this is took the piece of glass, and I taped a little shield around it,” Barnette said, “so that I would make sure people would be safe. You don’t wanna risk seeing the surface of the sun.”

And Barnette was not the only one to take advantage of this fact, hundreds of consumers across the nation have as well. Welding shops all over were also taking advantage of the trend.

Like Dressel Welding Supply and Roberts Oxygen, in Hagerstown, Maryland.

“We’ve been getting calls left and right about it… We had a few calls (earlier), but this week it’s been kind of nuts,” Roberts store Manager Jerry Jacobson said.

The extra dark lenses, such as shade 14, can be used to see the eclipse safely, according to the NASA website:

“Experts suggests that one widely available filter for safe solar viewing is welders glass of sufficiently high number. The only ones that are safe for direct viewing of the Sun with your eyes are those of shade 12 or higher. These are much darker than the filters used for most kinds of welding. If you have an old welder’s helmet around the house and are thinking of using it to view the Sun, make sure you know the filter’s shade number. If it’s less than 12 (and it probably is), don’t even think about using it to look at the Sun. Many people find the Sun too bright even in a Shade 12 filter, and some find the Sun too dim in a shade 14 filter — but shade 13 filters are uncommon and can be hard to find.”

There has been such a demand for these lenses that stores across the nation have sold out and created back orders, with some even creating waiting lists as long as 22 people. Unfortunately, not everyone got their lenses in time for the eclipse, leaving some unlucky eclipse viewers with welding glass they can’t actually use.

Considering that most welding helmets come with a shade 10 lens, not a shade 14, there was never really much need for something so dark. In fact, most welding suppliers don’t keep a large amount in stock.

The simple act of storing a lot of different tools can be difficult for a lot of people, especially if they work on a lot of complex home improvement projects. Units that have more than one different function can help people avoid making multiple purchases in the first place. They’ll be much less likely to run out of space in their workshops or garages when they decide to rely on these kinds of sophisticated units instead.

Some individuals enjoy collecting tools, and might want to own a very broad range of devices. These people still might want to get devices like these, which are valuable to own. The people who are specifically interested in the capabilities of these devices will be even more interested in units that give them the chance to save money.

A Chicago-based startup is looking to make applying and getting homeowners insurance much easier. Kin Insurance, which was founded by Sean Harper, Lucas Ward, Jason Heidcamp, and Sebastian Villareal, is merging …

A Chicago-based startup is looking to make applying and getting homeowners insurance much easier.

Kin Insurance, which was founded by Sean Harper, Lucas Ward, Jason Heidcamp, and Sebastian Villareal, is merging the insurance world and the digital age. Kin is making it easier than ever to insure a home, and the company’s app is targeted primarily to Millennials and those who may have no idea what they’re doing. These entrepreneurs believe Millennial home buyers will be more comfortable buying insurance through an app than in person.

The average person moves 12 times in their lifetime, and Millennials are especially prone to migration. College education is a major factor in how likely a person is to move, with nearly three quarters of college graudates changing location at least once.

Now, Millennials are finally settling down and buying homes in greater numbers, and Kin wants to find them when they do.

How Kin works is easy — their app enables homeowners to insure their home with just a click of a button. All the information they source on the home comes from a variety of online sources, and Kin relies on self-reported information from past homeowners. This wide array of information makes it easier than ever for the homeowners to bypass filling in boring details about their home — such as the number of windows they have or the type of shingles on their roof.

Kin believes their best asset is the fact that their insurance approval is automated. This means that there is a lot less paper pushing and overhead from multiple insurance companies, and applicants will get their results in less than one hour after filling out their simple questionnaires.

“Usually it will take around an hour of form filling to get your application submitted… Depending on the situation, it can be another 6-10 communications to get the whole process done,” Harper, one of the founders of Kin explained to TechCrunch. “For us it’s just three clicks.”

When applying for homeowners insurance, there are four factors that will influence the cost. They include the estimated cost to rebuild the home if it was destroyed, the home’s age, the neighborhood’s fire protection rating, and the applicant’s personal claims history. But the biggest problem, according to Harper, is not the cost of applying, it is how the insurance is sold.

Most homeowners purchase insurance through brokers and agents. However, Millennials, who are buying homes in greater numbers, don’t want to go through the same process their parents did. That’s where Kin can step in, giving homeowners one less thing to think about when it comes to purchasing a home.

Kin officially launched in the beginning of August with a $4 million investment backing. Their primary market is in Flordia, but the founders believe that within a year, Kin will be available nationwide.

A new study published in the Journal of the American Geriatrics Society has named poor dental hygiene as a contributing factor for malnutrition in elderly Americans. With around 47.2% of all adults above …

A new study published in the Journal of the American Geriatrics Society has named poor dental hygiene as a contributing factor for malnutrition in elderly Americans. With around 47.2% of all adults above the age of 30 already suffering from some form of periodontal disease, there is significant concern that there is a widespread contributor to poor nutrition and poor health that is not adequately being treated.

The study was performed by researchers from the University of North Carolina School of Medicine and aimed to determine what were the key risk factors associated with older adult patients who were receiving emergency care as the result of malnutrition and related medical issues.

Two hundred fifty-two patients, all 65 and older, were selected for the study across North Carolina, Michigan, and New Jersey. Those selected were then screened for malnutrition and asked about the possible risk factors.

The study found that 12% of the people in the study suffered from malnutrition. That number is in line with previous estimates. The number was slightly higher in North Carolina, prompting researchers to note that North Carolina has the third highest rate of elderly individuals living below the poverty line.

Additionally, the study found that over half of the study participants had some form of dental problems, and perhaps more significantly, those with dental issues were three times more likely to experience malnutrition.

Poor dental health is a problem that poses significant challenges for seniors, but also one that is not easily fixed. Colin Burks, who is a medical student at UNC and the lead author of the study, explained.

“Improving oral health in older adults will be more challenging but also important. Medicare does not cover dental care.” Burks said to Dental Tribune. “Fixing dental problems not only makes it easier for these individuals to eat healthy food but also can improve their self-esteem, quality of life and overall health. We need affordable methods of providing dental care for older adults.”

The fact that Medicare does not include dental insurance is key to understanding why so many seniors struggle with their dental health. With long-term treatment (28-35 days) using http://www.lbwr.org/ambien/ Ambien at doses up to 10 mg, the most frequently observed side effects associated with its use and statistically significantly different from placebo side effects were dizziness (5%) and a feeling of drug intoxication (3%). The average retirement age is 63 years old in the U.S., but the average life expectancy is almost 79 years. That means seniors have almost 16 years of either paying for dental care out of pocket, paying for a private insurance plan, or not receiving dental care at all.

Some states, like California, have taken to offering some seniors access to medicare-styled dental care programs. But as KUSI News reports, there are a number of serious concerns about the underfunding of the state’s Denti-Cal program.

Until a time when dental care is more widely accessible to seniors, it seems likely that malnutrition problems will continue.