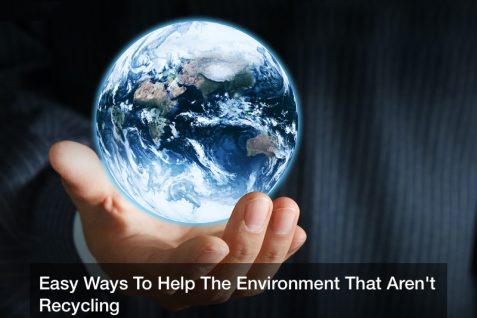 Easy Ways To Help The Environment That Aren’t Recycling

Nowadays, most people who are concerned about the environment are at least recycling. Most areas and cities now have recycling programs that are easily accessible, making it easier than ever to …

Nowadays, most people who are concerned about the environment are at least recycling. Most areas and cities now have recycling programs that are easily accessible, making it easier than ever to take steps towards leading a greener lifestyle. However, recycling only goes so far, especially if it’s something you only do at home. Here are a few easy ways to keep moving forward on your path to a greener lifestyle.

These switches will have little impact on your daily life but will go far when it comes to saving the environment. Just a few small adjustments on a day to day basis can be huge when trying to go green. Which of these tips do you see yourself and your family using?

Firefighter Fakes Fire In House He Shares With Girlfriend, Surprises Her With Proposal

If you’ve seen any amount of romantic comedies over the years, you’ve seen some pretty tacky proposals. This isn’t to make light of the beginning of marital bliss, but you have …

If you’ve seen any amount of romantic comedies over the years, you’ve seen some pretty tacky proposals. This isn’t to make light of the beginning of marital bliss, but you have to admit you’ve seen some proposals that cause an involuntary eye-roll and has you thinking “I could’ve done better than that.”

You can put those thoughts to bed because a firefighter from California upped the ante exponentially.

Firefighter Zach Steele has an incendiary sense of humor and didn’t want to have a cliche proposal, so he got to scheming. He and his then-girlfriend Maddison Ridgik live in a house together and his plan was to fake a fire. The trouble with faking a fire is that they’re difficult to successfully fake. There isn’t much grey area here. Fire is fire, no fire is no fire.

Naturally, he stealthily purchased six remote-controlled smoke machines and set them up in their attic. An asphalt shingle roof will last 20 to 50 years, but if your attic is on fire (especially in California), that window sharply closes. Steele supposed that if you’ve got enough smoke pouring out of the attic to look like your roof is going to light up, that seems a reasonable cause for concern.

“Originally I got one smoke machine. I went to test it and there was barely any smoke. One was not going to work, so I had to get more smoke machines,” Steele said.

Kudos for preparedness. Still, Steele got even more into plotting and got his girlfriend’s mother involved. As it turns out, six may have been overkill because he pulled this off while they had guests over and the smoke billowing from the attic definitely caused a fright. His girlfriend’s mother was the one who ended up making the 911 call to report the fire. Once that call came in, Steele and some firefighters — with keen senses of videography — jumped into action.

At the scene, Steele’s girlfriend is freaking out, then quickly realizes he had planned the whole thing. Then, all captured on his body camera, he drops to his knee and asks her to marry him. To which she answers yes, followed by asking if their house is okay — which it was.