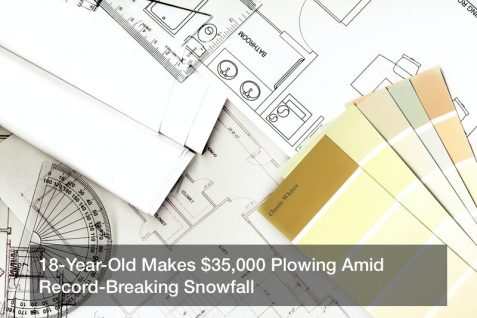 What were you doing when you were 18 years old? We can think back to those days and the words motivation, hustle, and hard-working are not the first that come to mind. Idaho …

What were you doing when you were 18 years old? We can think back to those days and the words motivation, hustle, and hard-working are not the first that come to mind. Idaho 18-year-old David Holston brings a whole new meaning to hard working and he was certainly rewarded for it.

Living in Idaho, Holston works for a landscaping company. Like many landscaping companies, there’s not so much land to scape in the winter, so they drive snow plows. As fate would have it, 2019 has been an incredibly snowy year for the entire nation. Which, for plow drivers, means business is booming.

Holston’s mother had recently had surgery in Seattle, Washington and was there visiting her. In case you weren’t aware, Washington State was buried under record-breaking snowfall. While Holston was visiting his mother, his friend told him he should think about bringing his plow truck back from Idaho and help dig people out. In the United States, there are about 5.9 million commercial motor vehicle drivers currently operating. Snow plow drivers are among those license holders who have been in highest demand as the winds of winter have howled, bringing more snow than usual. His friend had a good point. That’s what friends are for.

Holston returned to Idaho and posted an ad on Craiglist offering plowing service in Seattle. His first offer was for $1,000. He returned to Seattle to celebrate his mother’s birthday, this time with his plow truck. Holston’s office travels with him and he had is work cut out for him. After the birthday celebration was over, he set to work.

He had jobs lined up until midnight, then into the next day. In the end, at rates ranging between $500 and $750 per hour, he pulled in approximately $35,000 in the span of a few days. That’s a jaw-dropping haul for anyone, regardless of age, in the course of a few days. A good Christian young man, he gave all the glory to God, quoting scripture from the gospel of Luke (verse 12:31):

“‘But seek his kingdom, and these things will be given to you as well.’ The Lord blessed me with the money for the sole purpose of advancing his kingdom. All of the glory goes to God!”

With that money, he plans to buy some new lawn equipment for the upcoming landscaping season, save a good portion of it to put toward buying a first home, and is donating 20% of it to his church.

We aren’t much for telling people what to do with their money, but would he have been there if his buddy hadn’t given him the idea? He should at least take his friend out to dinner or something. 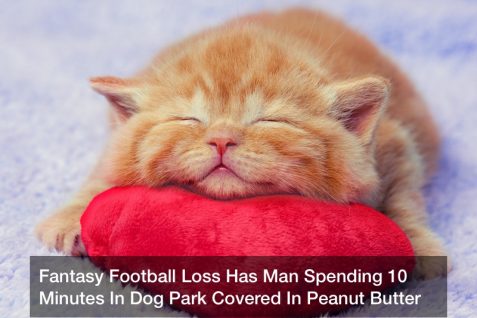 Pranks, practical jokes, ridiculous bets, and all the assorted mischief is reminiscent of childhood. Summer camp pranks a la Parent Trap are stories that may last a lifetime. The 92% of summer campers who say …

Pranks, practical jokes, ridiculous bets, and all the assorted mischief is reminiscent of childhood. Summer camp pranks a la Parent Trap are stories that may last a lifetime. The 92% of summer campers who say that camp made them feel good about themselves probably have a bunch of memories of poorly-conceived pranks. The trouble is, this playful spirit too often leaves us as we get older. One group of friends was determined not to let that happen.

Fantasy Football is an incredibly popular pastime around the United States. People get teams together and look at statistics to see which players will perform well, and lots of people get really into it. Other people couldn’t care less about it.

Twenty-five-year-old Steven Shrout from Arlington, Texas couldn’t care less about Fantasy Football. Since 2009 his high school buddies have been playing in a league together and Shrout had never been interested. They finally got him to join the league and Shrout, not caring at all, didn’t prepare or do any homework whatsoever. He came in last place at the end of the season. His buddies, feeling terrible for him, offered him an alternative to paying the winner $250. Shrout had to do something embarrassing. Naturally, he opted for embarrassing antics over shelling out $250.

Of the five most common personal injury cases, premesis liability is high on the list. Why? Because of things like this. The rest of the league decided that Shrout’s punishment was that he had to spend 10 minutes in a Dallas dog park wearing only a gold speedo and slathered in peanut butter. What could possibly go wrong?

So, he just did it. It was recorded. Probably could’ve been dangerous, possibly offensive, but apparently, the people in the dog park were good sports about his little stunt, as pet owners usually are easy going.

“My strategy was to do it as fast as possible, and hope that not many people would see me. A lot of (the dog owners) just wondered what I was doing, and then when I said I lost a bet, they all laughed,” he said after his punishment was over.

After the video went viral, Shrout officially joined the populous ranks of all those who have had to do embarrassing things in the name of Fantasy Football.

When asked if he’d ever play Fantasy Football again, he said he would. He just probably wouldn’t play with those guys. What are friends for?