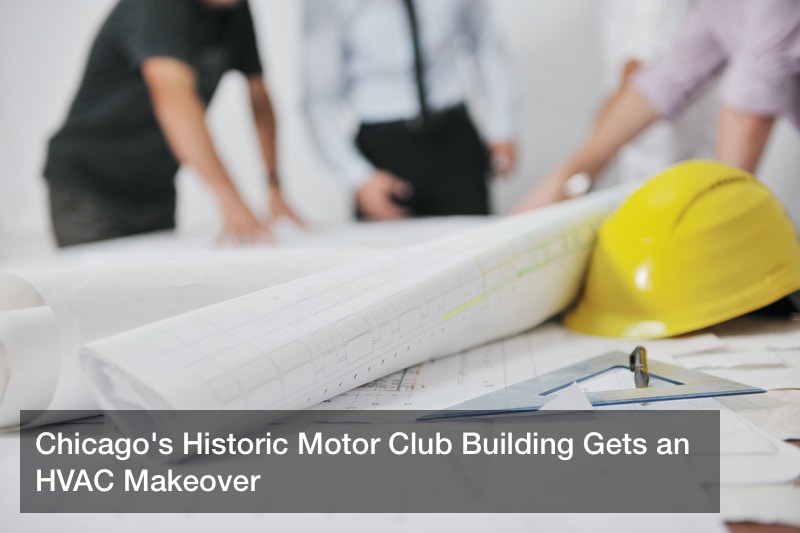 Built in 1928 and opened only a year later, the Chicago Motor Club is an architectural Chicago landmark. Recently, the Art Deco skyscraper received an infrastructural makeover.

With the help of LG Electronics, the Chicago Motor Club added an entire commercial HVAC system, helping it to transform into a 21st century, LEED-certified hotel.

Built nearly 100 years ago, the Chicago landmark had some understandably outdated heating and cooling systems.

When it comes to air conditioning systems, experts recommend inspection every 10 years. When properly maintained, an HVAC system can last up to 15 years.

Anything longer than that, however, warrants a serious update.

After over 50 years of occupancy, the Chicago Motor Club moved its headquarters to Des Plaines, Illinois in 1986. The historic building saw its fair share of owners and mismanagement, until it lost occupation altogether in 2004.

Around that time, Hilton began considering renovating the building into a hotel. One of the biggest challenges, however, was to update the building’s heating and cooling system without threatening the original architectural value and infrastructure.

As part of the renovation criteria, the builders made it an imperative to maintain the original appearance of the Chicago Motor Club. For the job, they hired State Mechanical Services as the installation contractor. This company was hand selected due to the delicacy of the matter.

The new owner of the Chicago Motor Club wanted to make sure the heating and cooling systems were accommodating to both the heat of the summer and Chicago’s notoriously harsh winters. Additionally, he wanted to make sure it would be running 24/7 and at a low sound level for the guests’ ultimate comfort and convenience.

To help meet the building’s needs, State Mechanical Services sought out LG Electronic, as the variant refrigerant flow technology ensured that the infrastructure of the building wasn’t compromised.

As of May 2015, the building has been renamed the Hampton Inn Chicago Downtown, and is a modern hotel with modern comforts and amenities, which still boasts its the original grandeur.

An air conditioner and ventilation system is one of the most important parts of a building. During the summer, buildings tend to heat a lot. This requires the residents to turn on the cooling system to make the building habitable. During the winter, an AC heater combo Home Depot supplies is a necessity. It helps in keeping the building warm. The Chicago Motor Club building consists of various rooms. In that case, air conditioning options for one room would be an ideal option. This would enable the people in every room to control the air conditioning system to suit their needs. People would prefer to heat or cool their rooms to different temperatures. Such would not be possible if the building uses one air conditioner with a single control.

There are plenty of air conditioning options for your home that you can choose from. The air conditioners are affordable, and therefore, you do not have to experience extremely low or high temperatures at home. Provigil is used off-label for the treatment of attention deficit hyperactivity disorder (ADHD). However, it is not considered a first-choice drug for this purpose. Read more on http://hesca.net/provigil/. However, these air conditioning systems can be broken. Whenever such happens, you should seek air conditioning repair services around you to have the system repaired. Having an air conditioner has become a common trend in every home since people desire to live in comfortable environments.