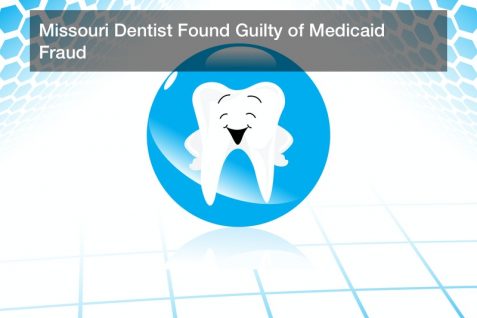 When people go to the dentist every six months for a regular checkup, they expect to be treated with respect and care, both in their treatment and their finances. Unfortunately, this …

When people go to the dentist every six months for a regular checkup, they expect to be treated with respect and care, both in their treatment and their finances. Unfortunately, this isn’t always the case — one Mount Vernon, Missouri dentist was recently found guilty of Medicaid fraud.

Dr. Thomas Alms was ordered by the court to pay $200,000 after being deemed guilty of misusing the Medicaid system. It was found that between Aug. 21, 2014 and June 14, 2016, Alms submitted several fake Medicaid claims from his dental clinic.

The news release issued by Missouri Attorney General Eric Schmitt’s office stated that the fraudulent claims were submitted for procedures including 11 bone graft replacements, 11 restorations,15 office visits, 15 pre-orthodontic visits, as well as other procedures like pulp vitality tests. So while there are around five million people who have their wisdom teeth removed every year, the claims Alms made were for procedures and visits that never happened.

Alms submitted claims to Missouri HealthNet for performing dental services on 26 Medicaid participants — the lawsuit alleged that after the Medicaid Fraud Control Unit requested Alms’ patient records, the records that were submitted contained false information. Considering how many American seniors are on Medicaid — and that 70% will need long-term care at some point — this kind of fraud could impact the health of countless people.

The investigation was completed by the Missouri Attorney General’s Medicaid Fraud Control Unit, headed by Amanda Burrows. The case involved an expert examination of a few patients of Dr. Alms, which eventually lead to finding Alms to be guilty of fraud. Alms was then prosecuted by Assistant Attorneys General Shannon T. Kempf and Brad Crowell as well as Lawrence County Prosecuting Attorney Don Trotter.

And this is not the first time Alms has had trouble with the law. Back in 2011, there was a civil lawsuit filed against him by the then Missouri Attorney General Chris Koster, again, for false Medicaid claims.

In the release for Alm’s most current case, Schmitt stated, “The Medicaid program provides health benefits to low-income families who don’t have access to https://sdarcwellness.com/buy-premarin-online/ health care. Cheating the system is actually cheating all the Missourians who rely on Medicaid and the taxpayers of the state of Missouri.”

While there are laws in place to protect businesses and their assets, like the 2016 Defend Trade Secrets Act, fraudulent cases are not protected under law, often having severe consequences.

Along with the $200,000 fine, Alms, will surrender is dentistry license and will be on probation for five years. He had been facing three counts of Medicaid fraud and one count of obstructing a healthcare fraud investigation — but because Alms pleaded guilty, the plea deal gave him a lesser sentence.

Amazon Is Expected To Capture 47% Of Online Sales This Year

Amazon is expected to capture nearly half of all U.S. online sales this year. According to the market research company eMarketer, sales for Amazon are expected to grow by over 20% …

Amazon is expected to capture nearly half of all U.S. online sales this year. According to the market research company eMarketer, sales for Amazon are expected to grow by over 20% this year, amounting to $282.52 billion. That’s approximately 47% of American online expenditures and 5% of the U.S. retail market.

A new feature from Vox traces the birth of Amazon Prime, the hugely popular membership program. Thanks to increasing customer loyalty, Amazon is now worth an incredible $900 billion. For reference, eBay is worth a mere $30 billion.

With each passing year, more and more people take their shopping online. Every year, about 2 billion t-shirts are sold around the world, and on Amazon you can find more than 300,000 individual listings for t-shirts. Amazon has capitalized on this trend better than any other company, putting major stress on traditional retailers. This trend isn’t likely to change anytime soon, either.

Cindy Liu, eMarketer’s forecasting analyst, says that Amazon’s growth has slowed but that it still outpaces the e-commerce sector as a whole. Considering e-commerce retail spending was predicted to double between 2016 and 2020, it’s fair to say Amazon has the lion’s share. Amazon is expected to continue to expand sectors that have high growth potential including pharmacy and grocery.

Amazon ships up to 1.6 million packages a day. That number will continue to climb as Amazon grows, and the retail giant recently announced it will now be lessening its environmental impact. Amazon said the company plans to make all its shipments net zero carbon with a 50% achievement goal by 2030.

There are currently 500,000 reefer trailers operating on U.S. roads, and there were approximately 24,142,000 general aviation flight hours logged in 2015 alone.

“It won’t be easy to achieve this goal,” said Clark, “but it’s worth being focused and stubborn on this vision and we’re committed to seeing it through.”

But that’s not Amazon’s only goal. Clark says the company also has a long-term goal to power its global infrastructure using 100% renewable energy.

Forbes has also reported that Amazon will require consumer products manufacturers to change their packaging to make it greener. Brands that comply early will be rewarded with a credit of $1 per item shipped. After August 1, brands that are non-compliant will have a surcharge of $1.99 per item.

Amazon has already started shipping its items in lightweight plastic mailers rather than boxes. Using the mailers rather than cardboard boxes produces fewer greenhouse gases. For even further innovation, solar panels may also be an apt consideration. Following in the footsteps of North Carolina, the nation’s second-leading state in solar panel installation, may be the greenest option of all.

The goal of the mailers is to fit more items in Amazon’s trucks and planes, and also to make the items more secure. Unsecured truck cargo was the cause of 200,000 car accidents over the course of a four-year study by AAA.

Some recycling centers have complained that the mailers often jam their machinery. Amazon has yet to determine how to fix this issue.

Although Amazon plans to make its major green changes by 2030, environmentalists are urging the retail giant to act immediately. This is because drastic measures are necessary to curb human-made carbon emissions within 12 years to mitigate the effects of global warming.

A group of Amazon shareholders and employees filed a resolution in 2018 that would require the company to share its plans for going green.

“I think an effective plan will include dates and milestones,” Emily Cunningham, an Amazon employee who signed the resolution. “To me, climate change is the issue of our lifetime. And we want to make sure they understand it’s that important.”