From Illinois to Florida, Quality Windows and Shutters Are Required During Major Storms 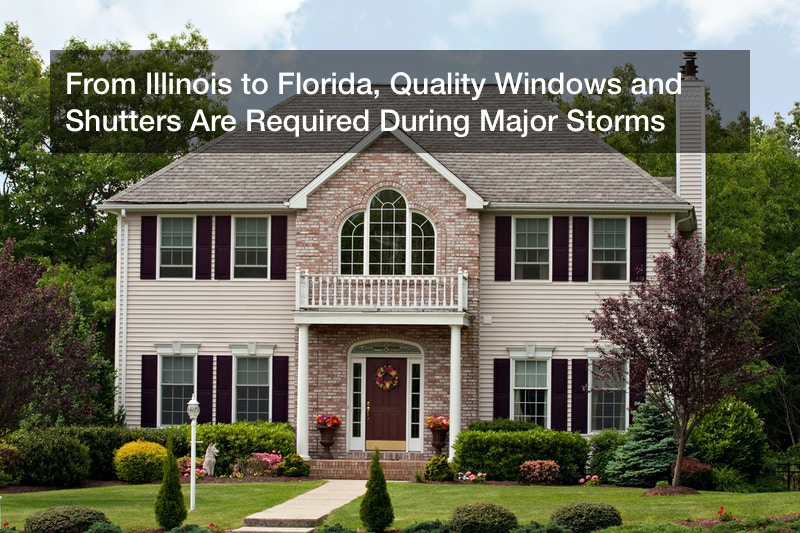 Tropical Storm Alberto was a costly and deadly pre-season typical cyclone. The Atlantic Hurricane season officially runs from June 1 through November 30 each year, and Alberto developed and struck the Gulf of Mexico in late May. On May 28, Alberto reached its peak intensity, with maximum sustained winds of 65 mph and a minimum pressure of 990 Mbar.

Alberto caused flooding and damage in many parts of the U.S., including Georgia, Tennessee, Virginia, Kentucky, South Carolina, and farther inland, Illinois. As many hurricanes and tropic storms do, Alberto spawned two tornadoes that touched down in both Ohio and Illinois. Additionally, the storm damaged an outbuilding and caused extremely heavy rainfall, setting rain records for the month of May in several Illinois cities, including Chicago.

Florida, on the other hand, experiences much more frequent storm-related damages. The average cost of a home water damage insurance claim is approximately $6,965, but can be much more costly after a major storm. Homeowners are already likely to repair roofs and other aspects of their property following weather damage, as 65% of property owners said it was their main motivation in a consumer survey. According to NBC -2, Florida fire departments are pushing for ordinances that would require homeowners to reevaluate their windows, doors, and shutters following both hurricane season and immediately after a storm strikes. Illinois residents could benefit from replacing and updating their windows, doors, and shutters after major storms, as well.

Greater Naples Fire Chief Kingman Schuldt is pushing for regulations that would require Florida homeowners to take down their storm shutters 30 days after a hurricane and an additional 30 days after hurricane season ends.

“No person shall allow unpermitted storm shutters to remain on a residential or commercial structure longer than 30 days after the end of hurricane season, which is November 30 of any given year. Shutters which are exempted from this requirement will include permitted storm shutters and plywood window and door coverings secured in a manner which meets International Property Maintenance Code standards located in Appendix A: Boarding Standard or Florida Building Code.”

Additionally, if a structure is located within one mile of the coast where the wind speed is 110 mph or greater, the Florida Building Code requires windows to be impact-resistant.

In other areas that don’t regularly experience wind speeds in the triple digits, in order to protect their homes and windows, many property owners often secure their window openings with wooden boards and plywood. However, in some areas of the country, there are specific ordinances against the boarding up of windows. The new Florida regulations (section 6-115) would allow homeowners to board their window openings for hurricane protection, as long as they are removed within 30 days after the hurricane passes.

Whether you’re living in Illinois, Florida, or simply visiting a part of the country that could experience severe weather, make sure you’re aware of the importance of window safety.