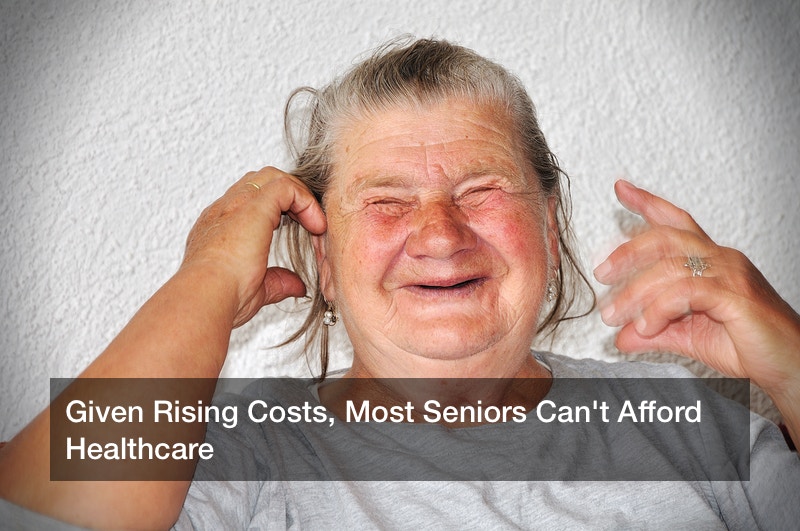 Although the majority of Americans believe that having access to affordable healthcare is essential, the current system setup has resulted in an almost complete lack of confidence. In fact, 80% of U.S. residents surveyed believe the quality of medical care is being compromised in order to increase profits. That’s likely a view held by many senior citizens. While promises of Medicare coverage might seem enticing from the outside, the reality is that many older Americans can’t afford healthcare coverage — and for those who can, that might not be true in 10 years’ time.

One study by Gallup and West Health found that seniors are paying for more out-of-pocket healthcare than ever before. Over the past year, seniors have withdrawn an estimated $22 billion from their long-term savings account specifically for medical-related expenses, with the average individual taking $3,789 out of their accounts for this purpose. Not only are seniors depleting their savings just to pay for healthcare, but they’re also borrowing money to meet those rising costs and forgoing necessary treatments out of fear that their medical expenses could put them in debt. In fact, 10% of Americans over the age of 65 did not seek out treatment during the past year specifically due to the costs of care. What’s more, nearly 7 million seniors could not afford to pay for prescribed medications over the last 12 months — a staggering statistic when you also consider that four out of five older people take one or more daily medications and that 80% of the prescriptions surveyed seniors couldn’t afford were used to treat serious or very serious health conditions.

And while Medicare does cover some conditions, it won’t cover eye care, hearing aids, or dental care. Despite the fact that the U.S. dental industry has grown by 2.5% during the last five years, many seniors aren’t taking advantage of those services due to increasing out-of-pocket costs. Nearly 40% of seniors did not visit a dentist during 2014, with two-thirds of seniors with annual incomes of below $35,000 saying they cannot afford dental care like crowns and bridges. Skipping even dental cleanings can have serious consequences. Around 70.1% of adults aged 65 and older have periodontal disease — and since gum infection and inflammation can lead to other serious health problems, neglecting this care can really hurt seniors later on.

Unfortunately, the problem doesn’t seem to be improving. The majority of seniors surveyed anticipated that healthcare costs would only continue to rise. And according to recent data, they’re probably right. Estimates show that by 2029, 54% of middle-income seniors won’t have enough financial resources to pay for the level of care they need (both medical treatment and housing). Since the population of middle-income seniors alone is expected to grow to 14.4 million over the next decade, these predictions are especially harrowing. Approximately 60% of those seniors will likely experience mobility issues, with 20% requiring extensive care due to disabilities or chronic conditions. And with few options at their disposal, the future looks rather bleak for many Baby Boomers and Gen Xers.

Currently, the healthcare system is a hot-button issue — and one that most politicians can’t even agree on. Unless drastic changes are made, many seniors may have no choice but to watch their savings dwindle or to abstain from the care they need to survive.